CBD Oil for Dogs with Cancer It’s any pet parent’s worst nightmare hearing those words, “I’m sorry, your dog has cancer.” Our pets are just as precious as any member of our family, so it goes without saying that we’ll go that extra mile to give them the best chance of recovery. And with not a day going past without another “cannabis cured my cancer” story in the news, it was only a matter of time before CBD cancer treatment for dogs started to gain traction. While CBD Dogs Health founder Angela Ardolino has no hesitation in using CBD oil on her pooches if a tumor is discovered, a recent scientific study has made strides in establishing why CBD oil for dogs with cancer could well be a canine antitumoral treatment of the future.

Cancer is best thought of a collection of diseases where cells divide uncontrollably and spread to surrounding tissues. Common types of canine cancer include:

Almost 50% of dogs over 10 will develop some form of cancer, roughly mirroring the incidence in humans, and like humans, standard treatment for canine cancer includes a combination of surgery, chemotherapy and radiotherapy.

For some time now, scientists have been investigating the antitumoral effects of cannabis on cancer cells, in particular turning their attention to special compounds only found in cannabis called cannabinoids.

While studies date back to the 1970s, it’s only been in the last twenty years that researchers have made significant discoveries. In general, the goal has been to find out whether cannabinoids might be anticancer drugs of the future in humans, but in the process most of the research has taken place either in petri dishes or on rodents (and occasionally dogs).

In the beginning, scientists concentrated their efforts on tetrahydrocannabinol (THC), the psychoactive cannabinoid most abundant in recreational cannabis. Early breakthroughs found that THC caused cancer cell death and tumor size reduction in patients with glioblastoma, a particularly aggressive form of brain cancer.

Initially CBD was largely ignored, possibly because researchers assumed the lack of any intoxicating effect meant it was largely inactive. Thankfully, these days CBD is most definitely considered a cannabinoid with anticancer potential, once again based on a raft of preclinical studies.

It’s important to remember that preclinical studies are no definitive proof of anything in science or medicine. Quite often something that kills cancer cells in a petri dish, fails to do so in animal models. However, when it comes to CBD oil for dogs with cancer, these studies give some validity to the experiences of thousands of pet parents and their furry family members around the world who’ve found CBD and cannabis has helped heal their cancer. 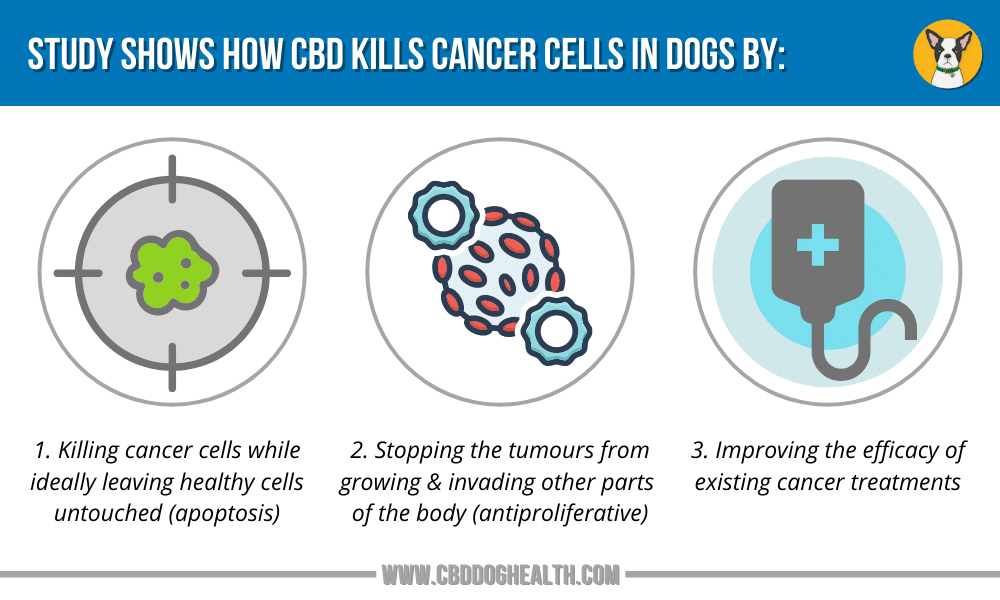 When researchers are developing an anticancer drug, be it for humans or companion animals, there are certain boxes that need to be ticked:

It just so happens that CBD shows promise in all three areas.

Cell death is part of life. It can be unplanned through infection, poisoning or lack of oxygen or programmed – a carefully executed cell death, encoded in the human genome as well as in other organisms.

However, in cancer, this apoptosis or programmed cell death no longer functions as it should and there is an uncontrolled growth of certain cells in the body. So finding ways to trigger apoptosis in cancer cells, while keeping healthy cells intact is a key target for anticancer drugs.

Preclinical studies show that in certain types of human cancer (breast, lung and neuroblastoma), CBD does indeed cause apoptosis; but what about in dogs?

Until recently, scientists knew very little was about CBD for dog-specific cancers and it was only in 2020 that the first canine-specific CBD and cancer study was published.

One of the key objectives was to understand how exactly CBD appears to reduce tumor size in canine cancers and what part apoptosis has to play?

Using cancer cell lines representing the main types of canine cancer (osteosarcoma, mammary carcinoma and lymphoma), the researchers administered either CBD, CBDA, or a full spectrum oil to the cancer cells. Encouragingly, they found that CBD stopped cancer cells from spreading, as well as having an overall cytotoxic effect brought about by both apoptosis and autophagy (the clearing out of damaged cell parts).

The researchers were also curious to observe any differences in efficacy between pure CBD, CBDA and a full spectrum CBD oil.

CBDA, CBD’s acidic precursor is found in abundance in raw hemp and only turns into CBD with exposure to heat. Until now, few studies have examined whether CBDA has an anticancer effect, so the researchers thought they’d observe whether the raw cannabinoid on its own had any noticeable antitumoral effect.

Perhaps rather predictably, CBDA had little or no effect at the concentrations used in the study. However, that’s not to say that CBDA when combined with CBD and all the other cannabinoids, terpenes etc doesn’t have some therapeutic value.

The investigators were keen to test out whether they could prove some validity to the much touted entourage effect whereby the synergistic action of all the active molecules found in cannabis and hemp are more efficacious than cannabinoids used in isolation.

When they compared the full spectrum CBD oil (containing tetrahydrocannabinolic acid (THCA), cannabigerol (CBG), cannabichromene (CBC) and cannabinol (CBN), plus a cocktail of terpenes) with pure CBD, they found lower amounts of the full spectrum product were needed to achieve the same cancer killing effect as CBD alone.

Whenever a cannabis-based drug is finally approved for treating cancer, whether for humans or pets, it will almost certainly be as an adjuvant to standard cancer treatments such as chemotherapy or radiotherapy.

A recently published GW Pharma study found that combining cannabinoids with chemotherapy creates better therapeutic outcomes than either cannabinoids or chemo on their own. So in this very preliminary study, the researchers wanted to see whether combining CBD with commonly used chemotherapy treatments used in canine cancer would potentiate the chemotherapies’ effect.

A very definite synergistic response was found when combining vincristine, a type of chemotherapy, with CBD. However, the therapeutic relationship between CBD and doxorubicin, another chemotherapy drug, wasn’t so clear cut.

At extremely high doses, doxorubicin and CBD seemed to work well together, however at low doses, they seemed to have an antagonistic effect (reducing the chemos efficacy). This led researchers to raise concern about how the low doses of CBD often administered by well-intentioned pet parents while their pooch is undergoing chemo, may in fact hamper the treatments effectiveness. Therefore they advise future research is needed examining chemotherapy and CBD drug-to-drug interactions in dogs.

What does this mean for you as a pet parent?

While this research is certainly exciting, it’s vital to remember that these are only preliminary findings carried out in petri dishes. However, the study does support the body of research that has already taken place into CBD and human cancer as well as the host of anecdotal reports from pet parents who say CBD oil helped manage their own dog’s cancer.

Perhaps the most important takeaway from this is to make sure you buy the best CBD oil for dogs with cancer possible, opting for a full spectrum CBD oil containing all the naturally occurring cannabinoids and terpenes. Also key is to ensure the CBD oil is free from pesticides, heavy metals and mold (and comes with lab tests to prove it).

At CBD Dog Health we’re biased of course, but we think both you and your pet will love our Heal range of whole plant CBD oils specially formulated to care for your dog during a cancer diagnosis. So if you’re looking for CBD oil for dogs with cancer, look no further than CBD Dog Health. 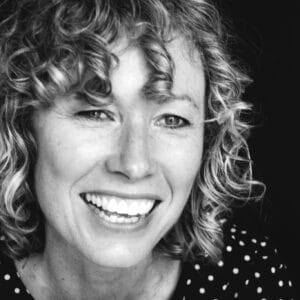